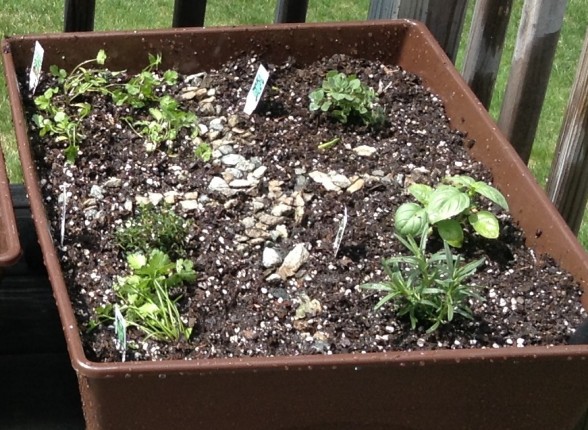 Last August, I put together a list of goals that I was working toward. I have to laugh, because just yesterday, I planted my first vegetable garden. Yes, I’ve taken up gardening! I am shocked.

I don’t like bugs. I don’t like being outside on hot days. I don’t like getting dirty. I’ve never liked plants or flowers that I had to care for, and usually just let them die. Flowers in a vase are fine, because I don’t have to do anything, but bouquets wrapped in cellophane are a hassle! Unwrap bouquet, trim stems, find a vase, fill it, dissolve the plant food, find a spot for the vase, discard dead flowers in a week and wash slimy vase. No thank you!

Last fall, someone suggested that tending a garden might help my older son to focus. When the weather was cool enough for me, I took my son to the garden center and together, we picked out a few plants and flowers. I had visions of him doing all the messy work, the digging, the watering, and the weeding. Those visions did not come to pass. I didn’t like the planting part, but we all had fun with the daily watering! We also all loved the way our garden looked. It was such a pretty view driving home and seeing life. I knew I wanted to plant another garden in the spring.

Over the past few months, I’ve felt inspired to plant a productive, rather than decorative, garden. I don’t think to eat vegetables and often buy them only to forget about them. As a kid, we mostly ate canned vegetables, so I never got into the habit of putting them on my plate (in any form) as an adult. I do love most vegetables, and thought that if I grew them myself, I might eat them more often. I’d also alleviate the guilt over not springing for organic.

I wanted to go big right away, but knew that container gardening would be a better choice this year. No weeds and less watering. Sounds great to me! I picked up some self-watering planters so there’s a chance some things will survive. If I succeed, I’ll start Square Foot Gardening next year.

It’s been less than 24 hours, so I can’t quite say I’m a gardener yet. But I’m so ridiculously excited about these vegetables! And herbs, which are foolproof, right? I figure even if my lettuce doesn’t make it and my carrots don’t pop up, at least I’ll have fresh basil, parsley, and thyme.

As for my other goals: I’m still working out regularly and I think I now qualify as being in shape. I ran/walked a 5K last weekend. I’m still adding clothing to my donation pile, and making careful and focused shopping lists (though given my post yesterday, those lists will change). I don’t feel much of the stress and anxiety of special-needs motherhood anymore, and honestly, that has been the most miraculous change this year. I’ve had some of the best times with my kids lately. I also have a seedling of a spiritual life again, growing nicely!

I can’t wait to tend to my little garden tomorrow! (Really? Did I just say that?)